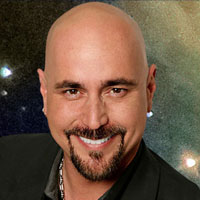 Discover Your Inner Psychic with Windraven

Windraven is a powerful psychic possessing deep empathetic gifts fueled by two potent bloodlines. He has spent his career studying both Celtic and Native American spiritualism, so that he can help you uncover your inner psychic and take control of your life.

"People don't have to call me to change their life. I'm more than happy to work on any problem, but I know my specialty is to help people find the power to take control of their own life. However, sometimes you just need to know what's in the heart of a lover, or more about a job situation, and I'm here to answer those important questions too."

I was born into an unorthodox family that had a hidden pagan culture dating back many generations. I didn't realize anything about it because it was matriarchal and run by the mothers and grandmothers of the family.

I first started seeing spirits when I was about five years old. The home we lived in was on the Apostle Islands of Lake Superior and my great-grandfather had built it. They would send me upstairs to go to bed and I would see him standing at the top of the stairs. I had a terrible reaction to it and didn't receive it very well at all. To this day I refuse to do any work with the dead, directly because of these early experiences.

Once I started kindergarten there were other spontaneous events that caused a lot of attention. Since I'm empathic, I didn't understand other people's feelings bleeding into mine. My family became very frightened because they had been hiding their faith for so long and eventually we were forced to move out of the state.

I'm the only boy in generations, so they didn't tell me much of anything. I was left to struggle and find out what was going on with me. Later, in the 70s, as I was coming into my teen years, I started doing my own research and studies.

I was closer to 15 or 16 before I started getting in control of what was happening and have a better understanding of it. Because my family, bless their hearts, never really told me what was going on because I was born a man, not a woman.

What are your specialties?

My greatest specialty is helping people recognize what's blocking them from achieving what they need in their lives. Since I'm empathetic, I can sense what people are repressing and what their dreams and feelings are so they can get in touch with their hearts. This also helps me reunite loved ones and helping heal wounds from the past so they can reconnect.

But the most important thing that I like to think of as my specialty is awakening people's inner psychic in themselves. I believe we all have one. It's our higher self. It's there to help us with our path and our own dreams. Basically, we just really don't know how to listen to it. It gets to where it can only warn us of problems and we don't use it to guide us to be in the right place at the right time.

We get so wrapped up in our conscious ego, thoughts, fears and criticisms of our selves that we can't hear our intuition anymore, and we're not sure to trust it. But we're all given that connection to the answer. Some of us are more gifted at birth than others, but we all have that intuitive divine self inside us that can guide us. If you're willing and open to it, you can listen to your own heart and not just take my word for it.

People don't have to call me to change their life. I'm more than happy to work on any problem, but I know my specialty is to help people find the power to take control of their own life. Sometimes you just need to know what's in the heart of a lover, or more about a job situation, and I'm here to answer those important questions too.

I start my morning with meditation and a form of energy work called Chi Gong. After that I do a series of Native American rituals. I do a four corners blessing and work with sage and other elements. The ritual takes about 2 hours each morning.

What have you done to develop your gift?

For the longest time I didn't realize that I have both Celtic and Native American blood, which are two distinct bloodlines with shamanic backgrounds. I couldn't make the connection with the Native American, so I went to study with Wallace Black Elk, one of the greater shamans of the Lakota nation. I visited sweat lodges and went on visions quests that helped me develop, if you will, that intuitive muscle. I learned how to release the ego for the divine Self because that is where this all comes from.

I work with cards and I do pre-cognitive tests every day to sense things coming. My Chi Gong work, working with energy, is huge.

Also, I have an entire tribal community that I meet with called the Black Snake Medicine Wheel. A medicine wheel is an ancient, indigenous tradition that is a huge part of my energy source. Especially when I'm doing back-to-back readings, I have to have ways of tapping into different energy sources and so I use the medicine wheel, prayer and meditation.

I also have spirits who help me a great deal. They are called totems or nature spirits. I exclusively work with living spirits. They also help me when necessary to recoup my energy, and they can also speak for me.

Do you care to share a recent memorable session?

I had one last night that I think is pretty classic call. She was a new caller; we'll call her "T". She called because she felt stuck in a dead-end job, she wasn't sure where her life was going and felt that she had a bigger purpose. So we began to look into it.

I immediately heard her singing in my heart. So I asked, "do you sing" and she said, "well I did and I've always wanted to…" So we went from there and uncovered that she harbored a dream to help children with disabilities through music therapy. She had let this dream go a long time ago. Even while we were on the phone, she realized that she had resources to work with and opportunities to advance her education. It was a very productive and good call. I love to see people become retuned with their dreams and their focus.

It's important to remember that what we hold in our hearts and our minds is what is drawn into our lives. If we become settled in our life and think that this is all that it is and let go of our dreams, we lose sight of what life is really about. If I can help people see that, so they can reconnect with their inner, higher self and allow that to guide them to accomplish their greatest love, joy, satisfaction and success in life, then I know I've succeeded.