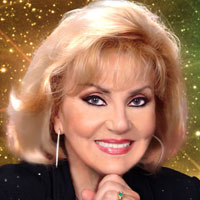 Psychic Cristina Sees Your Story in the Cards

Psychic Cristina uses the tarot cards to investigate the mysteries of your life. Not only does she see what's happening in your life, she can see why it's happening and what you need to know so that you can find the right path forward.

"I'm excellent at reading the tarot cards. I see a story and I use all the cards for the reading, for each question as a matter of fact, for clarification. My clients don't just get an answer; they get a real investigation on the hows and whys of their troubles and details on where they are headed."

What is your specialty?

My specialty is reading the tarot and applying that to bettering the lives of my clients. I show them what's going on and why in their lives so they can understand the truth, act with dignity and change their life.

As they're talking to me, I'm shuffling the cards. I tell them this right from the beginning. I tell them that I am shuffling the cards so I can get their vibe. I ask them to focus with me on their question and tell me what's going on so we can get going. That's where I use my clairvoyant ability: to get it going and to start telling them what they want to know so they can open up and we can get more details. I like to investigate and scratch more than the surface and get into the reasons so they can begin to change for the better.

What types of information do you glean from the cards?

I got a call from someone the day before yesterday, as a matter of fact. He said to me, everything is difficult for me and I can't seem to get it going. I asked about his love life. He said he was married. I asked how's it going and he said it was going all right. I started doing the cards and I said I see you have someone else. He said, "Yeah, there's someone that I see here and there." And I said, "That's your problem." He goes, "What do you mean?" I told him, "That's your problem. You're hiding something from your wife. You're not telling her because you don't really want to leave her, but you're hiding something from her. You're not being open with yourself; you know there's something shady going on. As you go to work, you might get phone calls there. It's going to affect your job. People will see you as secretive and lying. You're also going to be secretive with your money. It just goes on and on throughout your entire relationship. That's why you're getting static, because you yourself are creating static. You need to be honest with yourself. Then, if you're marriage isn't working, you can end it and move forward. But if it is working, then you need to end all these things that make it shady."

Then I saw this man that looked like his father. I asked if everything was all right with his father. He said that he had a very ambitious project that he wanted to start with his father, but his father wasn't too keen. I said that he probably sees you with all these women and with this and with that and he probably doesn't trust you to put all his investments into you. He said. "Thank you so much, I understand perfectly. It makes so much sense to me."

Just basically have to start with the right foot, you have to put yourself in the hands of the Creator, because he wants you to be successful and happy. And he's given you a free will to choose and you can choose, but it can be all the wrong choices that you're choosing. So when you're obsessed with all the wrong choices and trying to force it, it's not going to happen. You have to let go and have faith and trust.

Basically I start them with a clean slate to not force things to happen, but to start with trusting the one who started it in the first place. Like the making of a fine sword, we must go through the fire to mold the metal of our spirits by learning the lessons the universe sets before us.

And that happens until you change. And sometimes they can't see that. I just basically give them the knowledge so they go. "Oh my gosh, it was in my hands the whole time!"

The cards show them details. Where they're headed. My specialty IS reading the tarot and applying that to bettering their lives and going on the right path to see what's going on and why, and so they can understand. It's understanding the truth to empower them to act with dignity and change their lives.

Do you have any rituals that help you prepare for a reading?

When I do a reading, I go into my office and lock the door. I'm totally engrossed in the reading.

Also, my ritual is the word. Like it says in the Bible, "The word is God and God is the word." When you say something aloud something happens and your subconscious picks it up. When you say it out loud, you're actually focusing on that word and that's why when you pray aloud certain things happen. Try it. You'll see. That's why you can't say bad things. I always say don't say anything negative. If it seems like everything is going bad, you turn it around and say success, love, happiness, and accomplishment.

When I was looking for a job I said out loud "I want the job that will give me the dignity to pay for everything all by myself, have money left over for emergencies and to help my family and neighbors in need." And I did that and I got this wonderful opportunity. That's how I work it and that's how it works for me.

Are you open about your gifts in your personal life?

I'm open with it. I have nothing to hide. My husband tells everyone he meets that I read cards.

The cards allow me to pick up when someone has died. I had a client who was in the middle of telling me that she was feeling unhappy. I saw that and I saw a person with a lot of love surrounding her. I asked if she was close to her mother and she told me that her mother had died. I said, "I know she's with you. She's right here and showing you all her love and support. You're not alone."

She started to cry and told me that she never had the chance to say goodbye and always wanted the chance to tell her mother that she loved her so much. I told her that her mother understood and was giving her closure through the cards. She came to me with another problem, but this was the underlying problem. She said that it meant so much to her and it made her day, because she always wanted to know. It's always great when that happens.

But there are also some scary ones. I got one where I felt like my client had committed a serious crime and hurt somebody. I felt such heaviness during that call that was pain and fear. The cards were warning him that he was being watched and that if he acted up again then he'd be picked up.

How did you handle that call?

I prayed for him after the reading. Really, it left me wanting to do more to help the person he may have hurt. But God put me here and I have to help my client.