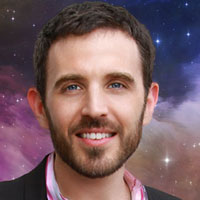 Denny is a natural-born psychic with powerful intuitive and empathic gifts. He has the ability to see your life path and provide you with guidance on the potential outcomes of your decisions. His wise spiritual guidance will help you find the right path forward.

"People have always been naturally drawn to me. Usually, within the first few minutes of meeting someone new, they start asking my opinion and advice on challenges in their lives. My guides let people know instantly that I'm someone they can tell anything to, without fear of judgment."

Can you tell me about your gifts?

I've always been a magnet for people who are just looking for a little bit of insight, people who just have a little bit of trouble, people who are on the cusp of greatness and just need a little guidance. Even in college, people would wander on to my floor in the dorm, thinking they were in the wrong spot and asking me questions and we'd end up talking for a half an hour. They'd end up telling me all about their relationship, what was troubling them and what was troubling their heart. I'd really say that my greatest gift is as an intuitive empathy, I guess that's the textbook definition of it, but it's really more just being able to see.

I always feel that people have two really distinct timelines and life paths in every situation. When I look at someone's life I see a tree branch. You've got these strong base limbs that go either way, then you've got these sub-branches and these smaller branches that go up and start to fan out, then you've got these twigs. So when I talk to somebody, I can see where they're on the tree of life. And then I can see in the next few months, if you were an ant walking on the tree, to get to the end you can take this left or right branch and if you go to this side you'll have these several outcomes, or if you go to the other you'll have these several outcomes. Additionally, I can see which decision or timeline they are more apt to take, based on their energy and their vibration. At that point I can either say we need to reel back right here and go the other way in this situation. I can basically see their outcomes, decisions and life paths.

How do you receive the messages?

I see things. I hear things. Sometimes I hear whispers in my ear. Then sometimes, when I'm getting a feeling and I don't know where it's coming from, my spirits will get in front of me and just nod to let me know I'm on the right track.

Can you tell me more about your guides?

I think they're all shared with my family. The beings that I describe to my mom and grandmother are the same ones they identified with. They aren't family member per se. We are in essence all family, so to say they aren't related to me would be silly.

Basically, we all have multiple lives. Everybody has a number of lives. As you go along this crazy thing called life, reincarnating, it gets to the point where you learn enough lessons in the physical realm that you ascend and you incarnate in your next life as a being of light, a being of love, like an angel. You come back and help the physical beings ascend to your level. And those beings have beings higher up, for lack of a better term on the totem pole if you will, that help them. Humanity is all about improving and getting closer and closer to becoming a being of love with no ego.

What have you done to develop your gifts?

I get a lot of strength from meditation and yoga. I have a very active dream/astral travel life. I have a whole other world that I venture into when I sleep. The beauty of that is that I take my clients with me into that world. I've even met some of them in that world and I get even more insights and even more answers. When I do astral travel, I pick up on things and jot them down and when I wake up I have them ready for my clients the next day. It's a never-ending journey. I just know what works for me and it's being positive, doing cleanses, meditation and astral travel. I constantly sage my house to keep all that good positive energy in and negative energy out. I'm surrounded by quartz crystals when I sleep.

It's been with me my whole life, so it doesn't seem so crazy anymore. It's like we all have muscles, but some people have bigger muscles than others. And some people are genetically predisposed to have an easier time working out. We all have those gifts and people, especially in these modern times, are buried in their technology that they don't take a chance to close the laptop and turn off the phone and meditate and just listen to the sounds. If you get really quiet you can hear the bugs, you can hear the wind and the birds. Most people don't hear that in a day.

Reading is basically a workout. Reading definitely helps. I do notice that when I go two or three days without reading that I can tell a difference and it's like I have to warm up. I meditate. I do Bikram Yoga. I definitely take one day out of every week to borderline fast. I'll go vegan for a day at least, if not two days, I'll do a vegetable cleanse or fresh juice from my juicer or just fruits and vegetables just to get out toxins or poisons that are in the food that we eat from all the hormones, antibiotics and pesticides. I've noticed also that when I do that it recharges me. If I take a day off and I do that I'll come back stronger, but if I go two or three days I notice a bit of stiffness.

It was very early. I was about five or six. I remember telling my mom that I had people coming into my bedroom at night and in my dreams telling me things. Whenever I would tell her that, she'd look over to my grandmother and just give that look like, "Oh, yeah." Normally, I would think that parents would be like it's just your imagination. But at the time, they would look over at each other and give each other a wink. Actually, I'm the first male in my family to have the gift. Mostly the females, my mom, my grandmother, a couple of my aunts and my great aunts had it. But I'm the first male that has it. My mom only had two boys and my brother doesn't have the gift at all. It's interesting. I'm the one who won out.

I had one client, I'll call her Jill, who was married to Henry for 30 years. He was good, but not great. And then, of course, because she had to learn this lesson about taking a chance and stepping out of her comfort zone, that's when her soul mate shows up: thirty years into a marriage with two kids grown, out of college and one is married and the other engaged. It's very scary, because she felt in her heart that Christopher was the guy that she'd been waiting for her whole life. She got married young, right out of high school, and was with a good guy, but not a great guy. That can be a very hard thing because we all deserve that cinematic romance with palpitations when they pull in the driveway. We all deserve that. We are all craving that. We're all looking for that.

When this guy introduced himself she knew he was the one. She had to risk alienating her children, her friends, breaking this man's heart and taking a shot on this real storybook romance. I told her that what she was feeling was indeed right, that this was her soul mate, and they had a couple of missed opportunities in a past lives where they didn't take that shot and they had constantly been circling around each other for lifetime after lifetime. They both were very conservative in that aspect. They had both been repeating that pattern of getting into something good, not great, of getting into something convenient, safe, but not taking a chance by putting their heart on the line to sacrifice. I assured her that her intuition and feeling was indeed true. She was either going to repeat this pattern that she had already repeated in a few lifetimes, or she could rip the Band-aid off all at once and take the plunge. She did and they are getting married this fall.

Things went a lot better than expected. The kids understood, the husband didn't take it as hard and was giving her an amicable split. When things are meant to be they actually end up being a lot easier to manifest than you think.