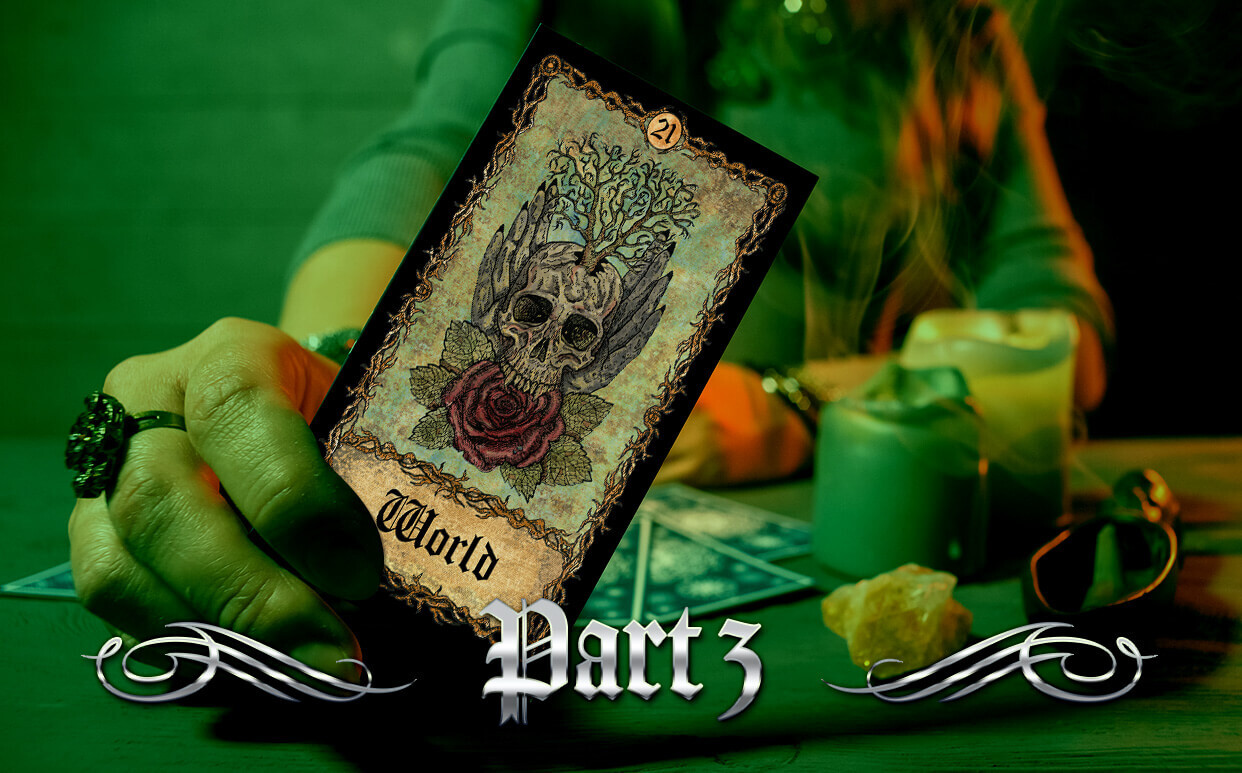 We’ve arrived at the last section of our Mythic Major Arcana Tarot—what mythologies do the remaining cards hold, and how will they connect in your readings?

An androgynous winged angel provides the serene backdrop for this card. In Greek mythology, this figure equates to Iris, the goddess of the rainbow. Iris is known to be the messenger of the gods. Drawing this card embodies moderation, balance, and manifestation of a divine purpose. However, in a reversed position, Temperance symbolizes a sense of imbalance, excess, and a need for personal healing.

Immoral, sly, and tied to physical pleasure, Pan is one of the most unlikely gods but a god nevertheless. Pan’s mythology infuses this card with messages of attachment, addiction, sexuality, and our shadow selves. Drawing this enigmatic card in reverse urges us to explore dark ideas and release our adherence to strict belief systems.

Poseidon is associated most strongly with the ocean, being the Greek god of the sea. However, the Greek mythological connection to this card is more symbolic. The sea is ever-changing and chaotic—something the two figures in the card know well as they jump from a burning tower. In our hero’s journey, this card is a turning point—no matter how stable something may seem, everything is susceptible to sudden change and chaos. This card speaks to these often frightening changes and the awakenings that result. In reverse, the card represents fear of necessary changes and a tendency toward avoidance.

A maiden collecting water and surrounded by lushness at the edge of a stream—seems idyllic. This card is relatively straightforward in its messages of hope, renewal, and purpose. Pandora in Greek mythology was put away for curiosity to know, opening the box. This card wants you to unlock the box within yourself to reveal these profound truths in parallel to this myth. Drawn in reverse, this can mean a lack of faith and disconnection of the self.

There are many symbols to unpack in this card, the moon hanging between two towers, a crayfish, a dog, and a wolf. Likened to Hecate, the Greek goddess of magic and the moon, this card represents the truth that lies within our subconscious at any stage of our journey. Even in darkness, the light that exists in darkness will guide our way. If upright, read for the role of illusions and the fear of the unknown. In reverse, a release of doubt or realignment with your path is needed.

The Sun draws a strong connection to the Greek god, Apollo, making a second appearance. The god of prophecy and knowledge, this Major Arcana card breathes an essence of illumination and clarity. Just like the sun is the life-force of the earth, this card represents a connection to your joy and life-force. If drawn in a reversed position, this can convey a sense of depression and a call to connect with our inner child.

Here we are at the crux of our journey, and the revelations undergone are now set forth into motion for a new change. Hermes, another familiar Greek god, is related to this card and its message of seeing a divine plan and moving with knowledge and confidence accordingly. If you draw this card in reverse, heed warnings of ignoring your true calling.

Our epic journey ends with The World. An image of a dancing maiden at the center of a complete circle seems like a far cry from the Fool, and it is. We have reached the end of our journey completely changed. Hermaphroditus is the Greek god that possesses both female and male characteristics and connects to the card's symbolism of completeness. Revered, try to watch out for delays and short cuts to ultimate clarity.

What do your new understandings of the Mythic Major Arcana mean for your journey?